This is a story about a student of mine - let's call them TB. This was a few years ago, before we had a Virtual BootCamp, which meant only folks in Madras could train with us at The Quad. TB was not living in Madras at that time, although is originally from here. They were going to be in town for vacation and emailed me about wanting to check out the class and say hi. And actually did - we got on great and they fit like a duck to water in our community. TB ended up moving back permanently a few months later and showed up to class the very next day after landing here, probably hadn't even finished unpacking fully.

Fitness was a core part of their identity, having been an active athlete all their life. Contrary to many of us who slip up when we go to college (as was my case), or move countries, TB was the exception. So, it was no surprise that they identified a place to train as part of all the various things that they needed as part of "moving back" package.

Showing up and putting in the work was a given.

TB was here to try their hand at their own venture, primarily as an army of one. They'd show up to class (3-5 days a week) from a not-so-near house, wrap up class, and then eat breakfast in the car. And then get on with their day which would end only around 9 in the evening.

Sounds crazy, right! But if we think about our own lives, we've all been there at one point - crazy driven and going places. Even if we are currently in a rut and coasting, we can get out of it by simply anchoring ourselves to a keystone habit. TB knew their keystone habit and had no time for excuses.

It doesn't have to be the startup life that's crazy. Unfortunately, all of us go through a period (a few years to sometimes unfortunately a few decades) of busyness. Until we figure out what's important and seek sustainability. Even if you aren't in a startup, you know what it feels like to juggle a hundred different things. I've written earlier about my students - here and here - who had more going on than me and I was always in awe of how they made it work.

Over the past few years, as TB settled down and their company took off (you'll read about them sooner or later in the newspapers!), their life got more hectic if that was even possible.

They hadn't taken a vacation in many years and as a coach, I realised that the strength coach part of it was the easy one with them. I recommended vacations and tried to even force it but I was also reminded of something Mark Cuban (the guy who owns the Dallas Mavericks and is on Shark Tank) mentions about never taking a vacation for 4+ years.

One of Coach Dan John's more complex lessons is the balance between work-rest-play-pray (and by pray he simply means alone time). I think we will always have some imbalance in these but as we zoom out, there should be balance. With work and family becoming a bigger part, finally TB found their core challenged - showing up was not a given.

being unhappy and harsh

Remember, TB's identity is centred around fitness and showing up. And their drive is significant - I've seen them batter against a wall and get through by sheer stubbornness and willpower. But all things have to give, eventually.

Perspective is rather difficult when it is us. We all have our blind spots. What is blindingly obvious to me is invisible to TB.

And this applies to all of us - we all have our blind spots about ourselves. Forget the bad things, I am talking about us not recognising a full plate and being harsh on ourselves as a result.

TB is annoyed and blaming themselves and has been trying to just somehow force themselves back into showing up. But there are only so many hours in a day.

my thoughts and notes to TB (and all of us) 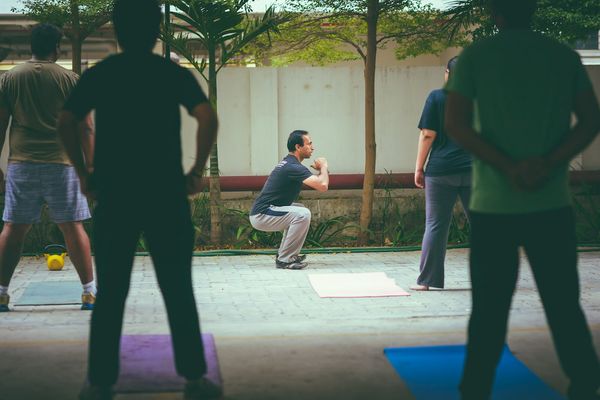 Starting from scratch, this person transformed their health and fitness. Aa couple of years later went back to square 1. Had the grit to start all over again!

Expectations and how we suffer because we push our expectations on others. Three quotes from Bruce Lee, Thich Nhat Hanh and James Clear to inspire you.